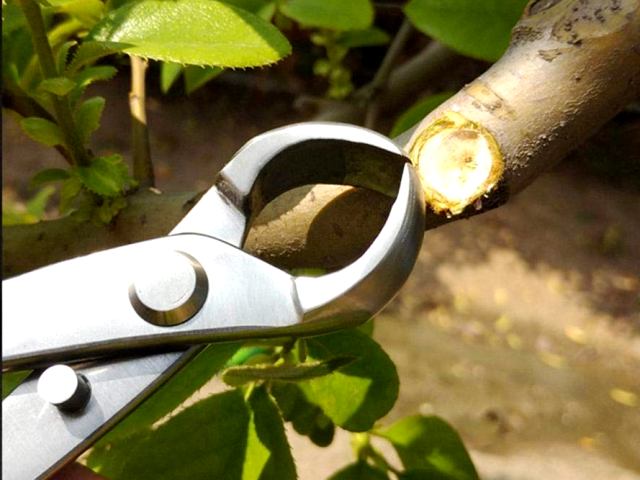 Once you have completed the work of tapering (kokejun), the initial rise
(tachiagari), and wiring, you can begin the final shaping of the plant. This is known as pruning your bonsai tree.

Pruning reduces the volume of the tree in order to achieve the goal of
“keisho-sodai”; small size-great similarity. You need to prune the branches, buds, and leaves.

Naturally, growing plants tend to be large and thick and inevitably have disorderly shapes. In order to remove the disappointing and unaesthetic parts of a bonsai plant, you need to prune its branches, buds, and leaves.

Moreover, pruning the exterior branches and leaves makes the interior ones more visible. This brings out a sharper view of the entire bonsai. It also facilitates branch pruning and wiring.

Branch pruning prevents the excessive development of branches when the tree is growing. It has three main components. The first step is to prune the branch tips, (the apical buds) to prevent the growth of the branches.
The other two steps are that you should prune the protruding branches and the unsightly ones.

Although pruning is simple in itself, there is no common rule as to when or which part is the most appropriate to prune a tree. The answer really
depends on your goal.

In general, the upper part of a tree grows more actively than the lower
part. On a single shoot, the most active growth occurs at the apical bud for it absorbs the most nutrients and water, which then inhibits the growth of lateral branches and lateral buds. This way, the outer part of a tree grows most actively. It is also possible that over the entire tree some specific shoots may stick out. If they are left untended, then the tree will only develop into a
chaotic mess.

The goal of pruning is to cut off the tree parts that disturb the plant’s shape so as to reduce the tree’s overall size and to improve its appearance.
The most important part of pruning is to ensure there are lateral buds and lateral branches on the pruned branches and the inner side of the tree. In order to realize the concept of “small size great similarity” (“keisho-sodai”), it is not enough to cut off branches or to merely reduce a tree’s size. You also need the smaller branches and leaves to develop fully. If you prune part of a
branch, then new buds will grow out of the lateral bud of what remains and they develop into new branches. This way branch pruning adds new branches and leaves to the tree.

When pruning branches, you should check if there are lateral buds on the
inside of the parts to be pruned. You should predict the direction and angle
of the growing branches and leave space for their growth accordingly.

Then you need to prune the branches near your side. In case some lateral buds have new branches in undesired locations or pointing in undesired directions, you should discard these lateral buds. On the other hand, if a branch has no lateral bud, then you can cut it off from its end.

This is called “kiri modoshi” (cutting back) or “oi komi” (shortening back close to the trunk).

When a branch is too large or too thick, this is incompatible with the concept of “small size great similarity” (“keisho-sodai”). So you should prune this branch.

Similarly, you should prune a branch if its shape is not good enough.  This allows new branches to grow from the remaining lateral buds
and lateral branches. This way you can change the direction of the branches and the trunk according to your will, and develop tapers and various beautiful shapes. This method is called “tate-kae” (reshaping the trunk or
branches by cutting back).

Buds are very precious to bonsai making, as aforementioned.
However, if these precious buds appear on the inner side of the tree, they are blocked by the outer branches and leaves, meaning they cannot receive sufficient sunshine or ventilation. These buds will not grow well and they may even wither. Pruning can improve the sunshine and ventilation for the inner side of the tree and thereby promote the growth of the buds.
You can conduct branch pruning at any time other than summer or winter.
In summer strong sunlight will damage the cuts, whereas in winter the cuts are easily frozen. You need to have a clear vision and devote meticulous work
in order to make excellent bonsai. The best period for pruning is when it brings minimal damage to the tree. Generally speaking, for deciduous trees, it is just after their leaves fall, and conifer trees is at the end of the tree’s dormancy. For certain species of trees, if you prune in winter, then in the following spring or later the branches may develop overlong internodes and the large leaves will grow very dense.

Node is where the lateral bud grows, and the space between nodes is called an internode. If stem and branches grow actively, the internode will become too long. A bonsai tree must have small size, so you need to cut off branches on the lateral buds near your side.

You use scissors to cut off the undesired branches that affect the aesthetics of a bonsai tree. This may not sound difficult, but in practice, it is a great
challenge to the beginners to figure out where to cut and how to cut.
Branch pruning is unnecessary for young trees.

It only applies to the trees that have developed basic shapes and have obvious undesirable branches in need of pruning. Nevertheless, it is possible that some branches that were thought undesirable are in fact very important. So you must exercise caution during branch pruning.

An undesirable branch can be the long branch on an internode growing outwards from the tree. Or it can be any branch with an unattractive shape, such as “imi-eda” (the dredful branches) in traditional bonsai.

When you cut off a thick branch from its end, you should use a concave
branch cutter to hollow it out a little at the branch end so not to leave scar.

If you want neat cuts, then you should use a sharp concave branch cutter or
pruning shears. In addition, you should not let the cut wound be in direct
contact with air or water.

Generally, the best time to prune the thick branches of deciduous trees is in spring before the buds sprout. Whereas the best time for conifer trees is between autumn and the end of their dormancy except freeze-up.

How to prune a branch and sealing the wound. Chinese elm.

1. Use suitable cutters or a small tooth saw to remove unwanted branches.

2. Keep cuts as small as possible but the priority is to ensure wounds can heal in an attractive way.

By making a slightly larger cut flush to the trunk this scar will become almost invisible in the future.

3. Shave off the rough edges of the wound using a sharp, sterile knife and shape so that is completely flush to the trunk.

This speeds up the callusing process and ensures the final scar is less obvious.

4. When the cut stopped bleeding, apply a thin layer of suitable wound sealants such as paste containing antifungal and antibacterial agents.

Use it sparingly: a thick layer can actually inhibit healing.

We recommend you a japanese cut paste as kiyonal.

Healing paste offered to be used in bonsai to heal wounds, seal cuts, and assist with grafts.

For more info and special discounts please click the link below

5.Allow the sealant to dry. The seal will stay on the tree for several years until a callous form naturally underneath.

Don’t be tempted to remove the sealant to see what is happening beneath it.

6. for larger wounds especially on species that are very slow to callous you may want to apply sticky-backed aluminum tape over the top of the wound to promote rapid healing.

Do you need more information about the paste to seal wounds? visit our website

Bud pruning (pinching) and leaf pruning both aim to develop small
branches and leaves. These methods have the same effect as branch
pruning.

They are applicable when branch pruning may not apply, such as when the bonsai trees have completed shapes, or when you only want to suppress the overlong branches on the tree without pruning them.

For example, you can apply these methods to deciduous trees that have beautiful branches and leaves, such as Acer (Maple), Zelkova, Beech, and Hornbeam.

In addition, bud pruning is applied to trees whose branches have been
pruned but their lateral buds are not growing well.

Bud pruning is also used for conifer trees such as pine trees because leaf pruning may damage the plant and cause it to wither or tend to develop leaves of poor shape.

Bud pruning (pinching) is to pinch by hand (Me Tsumi) or to prune with
scissors (Me Kiri) the apical buds that grow out one after another.

The overgrown apical buds disturb the healthy development of a bonsai tree’s
shape. You can prune the apical buds with scissors or pinch them by hand
before they grow out.

For some tree species, such as the Japanese black pine, pruning with scissors could cause the pruned parts to wither.

Bud pruning must be done immediately after the new buds appear. The
key to this work is to find time to carefully pinch every new bud. You only
need to pinch the apical buds to stop or slow the growth of the branches.

In doing so you can also add small branches and evenly growing leaves. The
details of bud pruning are similar to other kinds of pruning. You need to
prune the well-developed parts of the tree such as the upper portion, and
you should not prune the less developed lower part so much.

You should also keep an eye on the length of the entire tree and make sure the leaves grow consistenty. In general, for conifer trees such as the Japanese black pine, you should not prune the well-developed buds altogether lest the tree will wither.

Bud pruning can damage the tree, so you must provide the tree with plenty of fertilizer and water before and after bud pruning.

You should monitor the tree’s health and make adjustments accordingly to the extent of pruning.

In particular, if the plant appears to be weak just like what would be observed
after repotting, then the buds are not growing healthily and you should keep
away from bud pruning.

In case you want the branches and the trunk to grow thicker, you should exercise control in bud pruning.

Almost all trees bud in spring, so bud pruning is generally conducted during this season. However, plants such as Zelkova, Acer (Maple), Shimpaku Juniper, Needle Juniper, and Cedar will continue to bud until autumn, so you should pay special attention to the budding of these plants in this period.